skip to main | skip to sidebar

London is awesome, as usual. Even though it hasn't been that long since the last time we were here, there are a lot of changes. There are more "eyesores" in the central area, meaning things that really don't seem to belong. The London Eye ferris-wheel thingie looks completely out of place. We walked by it and then walked across the new Millenium walking bridge across the Thames. It doesn't really seem to fit either. Maybe I'm just stuck on my mental images of what London used to be.
We opted not to go to the Tower of London. They now charge 16.50 pounds for entry. That's about $33 per person folks. Sorry, but that's outrageous. It should be free like most of the other historic sites. We spent the morning in the British Museum (which is free) looking at the Egyptian stuff. Incredible. Dax would be very impressed. Then we went to Westminster Abbey (which does charge a fee, but a reasonable one). It's pretty impressive. It is kind of weird to know you're walking on top of Robert Browning's body and then stand next to the tomb of Elizabeth I and Mary Queen of Scots. The coronation chair is there too, which was pretty cool to see. Standing in the nave, I vividly remembered Princess Diana's funeral as well. I think I still prefer St. Paul's though.
By the time we did all that, we were exhausted, as we also walked around Trafalgar Square and down Oxford Street for a while. Our feet and backs are not as young as they used to be and it's pretty tiring. Saw a guy in a Vancouver Canucks jersey which was kind of funny. There aren't nearly as many tourists here at this time of year, but it is still incredibly crowded everywhere. You have to really watch yourself crossing the street. As we discovered, the rule about pedestrians having the right of way does not exist and of course we keep looking in the wrong direction for ongoing cars.
Not sure what is on the agenda for the last day today. I still have lots of money left so maybe we'll go to Harrod's.
Posted by East Coast Oilfield Technical Society at 4:15 AM No comments:

Cornwall and Back to London

Had a great time in Cornwall. Went to Penzance first and stayed at what looked like a really posh hotel, but inside, it turned out nothing had changed since about 1922. All a bit worn and tired, not to mention somewhat smelly. The old lady who greeted us was about the same vintage and a little dotty, but very nice. It was fine for one night and had a terrific view out over the harbour and St. Michael's Mount.

The picture is from Land's End. It was pretty spectacular there and well worth the visit. We then spent the next day in St. Ives which was absolutely beautiful. We took the local transit bus between Penzance and St. Ives. This should be a very expensive thrill ride in a theme park. You haven't lived until you travel those back roads (well, cow paths really), in a large bus, meeting speeding drivers around every corner. Several times, either the bus or the oncoming car had to back up to let the other by. Winding through the tiny villages with 5 foot wide streets was such fun. Glad I wasn't driving.

We're back in London now until we leave on Wednesday. Planning on hitting some of the touristy stuff we missed on our other visits. London is something you can't really describe. It is so multi-cultural now and extremely loud and busy but in some parts, nothing has really changed in hundreds of years. Unfortunately, the days of nipping into a pub for a cheap meal are gone. Most of them are not serving food and if they do, it's expensive. It's all McDonald's, Subway, Pizza Hut and a lot of kebabs, donairs (or "doners" as they call them) and Chinese take-aways.
Posted by East Coast Oilfield Technical Society at 4:30 PM No comments:

Caldon Canal to the End 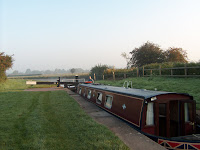 We turned the boat in this morning and was kind of sad to see it go back. Oh, lovely Serena, as that was her name. She served us well. Except for one minor grounding and a few dents in the fenders, it was a delightful trip. Only once was mutiny considered...when the captain insisted on trying to get me to work before I had finished my first morning coffee. When I say work, I mean cranking 200 year old gates open and closed on the locks. They are really, really hard work and of course, someone has to stay on the boat while we are going through (guess who - see picture). Also, just for future reference of anyone contemplating this kind of trip, the time to say "watch your head", is BEFORE you hear the crack of your crew's head on the steel hatch cover. It hurt like hell for about an hour and I think I lost some bits of my memory, but I'm over it now.

We are now in the lovely seaside town of Penzance in Cornwall in the west country. It is beautiful down here. We hope to go to Land's End tomorrow and then on to St. Ives for a night. After that, probably back to London before flying home on Wednesday.
Posted by East Coast Oilfield Technical Society at 3:43 PM No comments:

Wonderful weather continues. Went almost to Great Hayward and turned around (excellent job by the skipper of making a turn with a 58 foot boat!!!!) Have stopped in the town of Stone for the night, hopefully in a quiet spot...no pubs nearby or trains zipping past at 80 skillion miles an hour. Have found the secret to good coffee in England is...make it yourself. Bought a French press and now make coffee on board. Eating bacon butties, lamb chops and fresh strawberries with clotted cream. Really roughing it this trip. Next stop...the Caldon Canal...finally got the hang of operating the locks. Had to do them today with lots of Sunday strollers as spectators and many tips and advice...some of it conflicting! Oh well, onward to Leek.
Posted by East Coast Oilfield Technical Society at 11:39 AM 2 comments:

Absolutely beautiful weather here in England at the moment..perfect for canal boating. People along the way are extremely friendly and helpful, especially at the locks, considering we are new to the whole thing. Had to do about 10 of them this morning before we stopped to rest and have a bite to eat. There was a rather crazy lady walking the towpath at one point, muttering to herself, and for no apparent reason, told Cal to fuck off. Hopefully, this trend will not continue...that's my job!Getting some great pictures. Not so much luck finding wi-fi spots along the canal. Currently in a shopping area of Stone across from a pub so there's good coverage here. More updates soon.
Posted by East Coast Oilfield Technical Society at 7:37 AM No comments:

Arrived in Stoke-on-Trent on Wednesday after a long combination of planes, trains and taxis. Walked a bit of the Trent canal today from Wedgwood Visitor's Centre back to Stoke. Quite a hot sweaty walk...who said the English weather is damp and cold. Not today! Looking forward to picking up the boat tomorrow. No idea how often we will be able to update this since apparently, internet cafes are not exactly rife in this area.
Cheers - looking for good coffee in this country is a joke!
Posted by East Coast Oilfield Technical Society at 1:09 PM No comments: